What is an Arteriovenous Malformation (AVM) ?

AVMs are an abnormal network of blood vessels that bypass capillary beds and shunt blood directly from arteries to veins. This abnormal network makes the blood vessels weaker and prone to rupture or leakage, causing damage to the surrounding areas. There is no clear cause of AVMs, and they are considered rare, with a prevalence of 0.02% (18 in 10,000) live births. AVMs can occur anywhere in the body including the brain, face, stomach, and extremities.

An Arteriovenous Malformation is an abnormal connection between arteries and veins, bypassing the capillary system.

AVM’s are always present at birth but are usually not noticed until later in life. Sometimes they do not appear until adulthood. These lesions are typically associated with defective blood flow. As the lesion ages, the vessels enlarge and thicken to compensate for the increased blood supply. AVM’s can cause intense pain and lead to serious medical problems.

Because the AVM has no capillaries to dampen the blood flow, the AVM can get progressively larger.  Over time the amount of blood flowing through it increases. The surrounding areas can also be deprived of the functions of the capillaries such as delivery of nutrients and removal of carbon dioxide. The resulting mass is often called a “nidus”.

Signs and symptoms for the pediatric patient may include heart failure, macrocephaly and prominent scalp veins.  More information about AVM can be seen on the wikipedia page.

How are AVMS graded?

What are the common sites?

An AVM normally presents as a firm mass. The lips and other head and neck areas are common sites for an AVM. Additionally you may see mixed malformations that include a combination of two or more vascular lesions. Arteriovenous malformations can occur anywhere in the body and are usually isolated abnormalities in otherwise normal, healthy individuals.

Is there a genetic link?

AVMs are congenital but not genetic (with rare exceptions), meaning that there is little likelihood of passing them on to one’s children, little likelihood of siblings having the same problem, and rarely any family history of vascular malformation. There are rare genetically transmitted familial syndromes (such as Rendu Osler Weber Syndrome) where multiple family members will have multiple AVMs, but most affected families will already be aware of this condition. Unlike hemangiomas, there is no tendency for them to occur in females and they seem to occur with equal frequency in all races and ethnic groups. 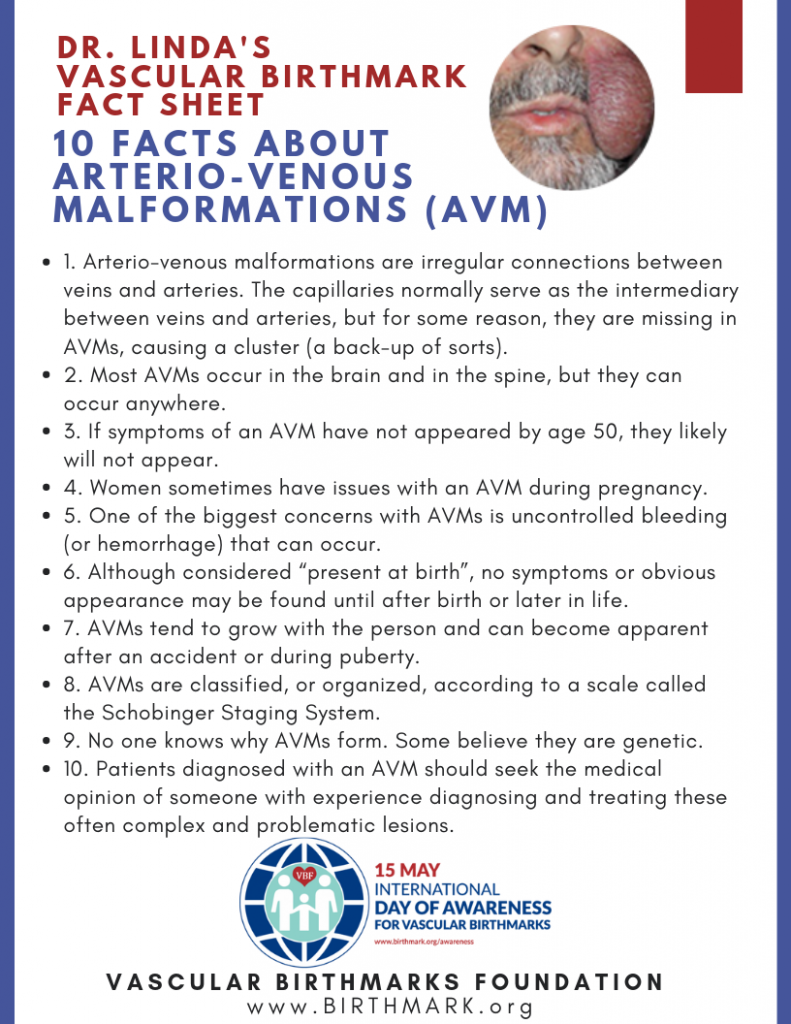