Hemangioma: Frequently Asked Questions booklet is here! Click the image below to download a free copy of the booklet. 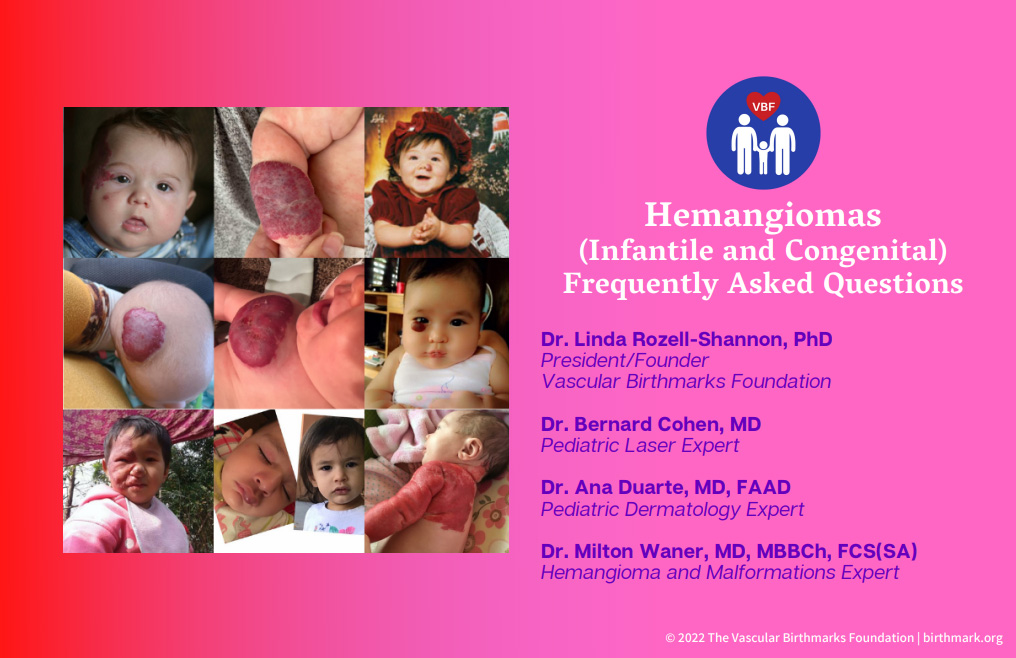 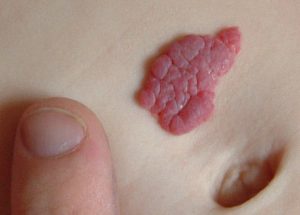 What is a hemangioma?

A hemangioma is a benign, blood-filled tumor. Fourteen in 100 children are born with a vascular birthmark; most are hemangiomas. Ten percent of these children require the opinion of a specialist while the others have insignificant hemangiomas or lesions which are small and located in an area covered by clothing. Early and accurate diagnosis and treatment is key.

Hemangiomas occur in up to 12 percent of all infants by one year of age. They occur 5 times more often in females than in males and predominantly in Caucasians. Twenty-three percent of babies born with hemangioma are very low birthweight (2.2 pounds or less). Low birthweight infants (less than 2.2 pounds) have a twenty six percent chance of developing a hemangioma. The reason for the high incidence of vascular lesions in low birthweight children is unknown.

Hemangioma and vascular malformations are vastly different from each other; they have different outcomes, and they are treated differently. To assure the best outcome in treating any congenital lesion (birthmark) the doctor has to first be sure what it is. Early and accurate diagnosis leads to the correct treatment. The wrong diagnosis leads to treatment that is useless.

What are the most common hemangiomas?

Approximately eighty three percent occur on the head and neck area. The remaining seventeen percent appear throughout the the rest of the body (both externally and internally). In the early stages some appear either as bluish or reddish spots or flat patches. A hemangioma is rarely fully grown at birth.

How do hemangiomas grow?

The most rapid and significant growth occurs between 1 and 3 months of age and that growth is completed by 5 months of age in most cases. Because many Infantile Hemangiomas leave behind permanent skin changes, there is a window of opportunity to treat higher-risk infantile hemangiomas and optimize outcomes.

What is a typical treatment protocol?

Early intervention and/or referral (ideally by 1 month of age) is recommended for infants who have potentially problematic Infantile Hemangiomas. When systemic treatment is indicated, propranolol is the drug of choice at a dose of 2 to 3 mg/kg per day. Early and accurate diagnosis is key.

Treatment typically is continued for at least 6 months and often is maintained until 12 months of age (occasionally longer). Topical timolol may be used to treat select small, thin, superficial Infantile Hemangiomas. Surgery and/or laser treatment are most useful for the treatment of residual skin changes after involution and, less commonly, may be considered earlier to treat some IHs.

Hemangiomas can grow for up to 18 months and then begin a long slow regression known as involution. This involution can last from 3- 10 years. While all hemangiomas eventually ‘involute” the result is not always cosmetically acceptable. Early intervention has been shown to reduce the need for corrective surgery after “involution” has occurred; or to, at least, minimize extensive corrective surgeries in the future. Psycho-social scarring which occurs when a child has been forced to live with a facial deformity until “involution” has been completed can be avoided by early, aggressive intervention.

Is a hemangioma life threatening?

In some cases, hemangiomas can be life threatening or severely problematic (interfering with eating, breathing, seeing, hearing, speaking, etc.) and require immediate aggressive intervention. Hemangiomas that grow internally can be very dangerous. They are difficult to detect and when they are detected, the infant is often in need of immediate intervention. Internal hemangiomas (referred to as visceral) occur in the liver, intestines, airway and brain. Infants who have what is referred to as hemangiomatosis ( multiple hemangiomas) are suspect for internal lesions. When an infant has more than 3 hemangiomas, an ultrasound should be done of the entire body to rule out internal lesions. Jaundice may be a sign of liver hemangiomas, blood in the stool may be a sign of hemangiomas on the intestines and stridor (croupy cough and difficulty breathing) may be a sign of airway hemangiomas.

Was it something I did?

If you’re a parent with a child who has a hemangioma, you should not feel guilty, as the occurrence or appearance of these birthmarks has not been determined. The important thing to remember is that accurate diagnosis and early intervention is key. Hemangiomas, like people, come in all shapes and sizes. Some are small and hardly noticeable, while others are large and disfiguring. Here’s some further information from the Mayo Clinic.

Hemangioma may run in families, but a proven genetic or chromosomal link has yet to be found. Studies are under way to determine if there is a genetic link. The goal of research is to find a cause that can one day lead to prevention.

Read the 2019 American Academy of Pediatrics (AAP) Clinical Practice Guidelines for the Management of Hemangiomas for the latest in research and treatment. Visit the AAP Information Page for Infantile Hemangioma Resources. Share these guidelines to raise awareness and change lives. 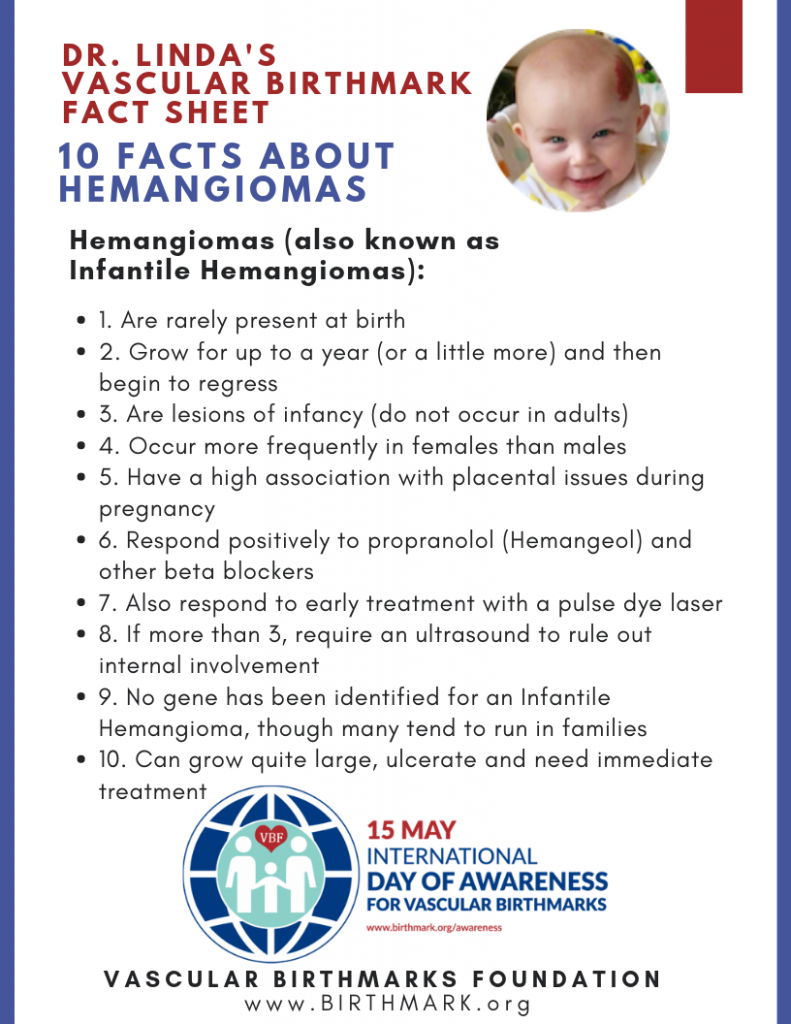 Paige: You are in the Right Place

Alyssa:  Running Her Own Future

Kelsey: Beauty and the Hemangioma

Braeden’s Story: Gone But Not Forgotten

Anonymous Story: An Ulcerated Hemangioma – Not A Diaper Rash

Thank you to Dr. Linda Rozell-Shannon, PhD & Sarah Kathryn Kenis, RN for contributing to this content.