I’m Trista from Crochets By Trista. I’m a fledgling crochet designer who hopes to bring joy to the crochet world by making easy-to-follow designs. I love designing accessories that pair well with a classic wardrobe of jeans and t-shirt.

During the month of May, I will be running a fundraiser with 50% of my pattern sales going toward Vascular Birthmarks Foundation. My patterns can be purchased on Etsy and Ravelry (links listed below).

Vascular Birthmarks Foundation has become a cause that is near and dear to my heart. In 2015, my son Gavyn was born with a Port-Wine Stain Birthmark (PWS) on the left side of his face and head. You can use this page to read all about my  journey as a mom of a child with a PWS, make a direct gift to VBF in Gavyn’s honor, or to find links to my Crochets by Trista Fundraiser. THANK YOU for your support! 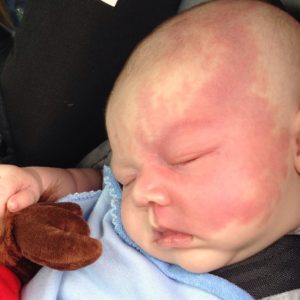 When Gavyn was first born, the pediatrician at the hospital told my husband and I that the redness on his face and head wasn’t bruising from the delivery, but was a Port-Wine Stain Birthmark.  She gave us a quick overview but wanted to wait to talk to his normal pediatrician and go from there.  That evening we did our own research and learned that every birthmark is individually unique, just like the person who is born with it.

Some birthmarks are small, some are large; some can be dark, some can be light.  Depending on where the birthmark is, it can cause other medical issues. One main medical concern with Gavyn’s birthmark, since part of it is over his eye, is that he can develop glaucoma. We see an ophthalmologist every year to be proactive regarding this concern. 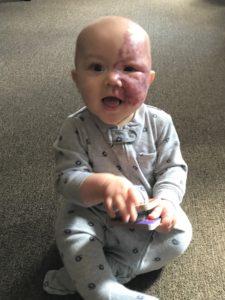 In March 2016 Gavyn had his first laser treatment. Both my husband and I were nervous wrecks the whole 20 minutes he was having the procedure done. Over the course of the rest of the year, Gavyn underwent five more treatments. Each one was easier than the last, except the final one.  He was 18 months old at that point, and I think by then he became more aware of what was going on. We were happy with the results and came to the conclusion that if he wants to have more laser treatments in the future, it would be up to him.

Every year on May 15th, International Vascular Birthmarks Awareness Day, we participate in the #putonyourbirthmark social media campaign. My daughter and I draw hearts on our left cheeks and post our pictures to help spread joy and awareness for vascular birthmarks. I also send a note to her teachers about the reason behind the heart on her cheek, and they are just as supportive.

MY HOPES FOR THE FUTURE 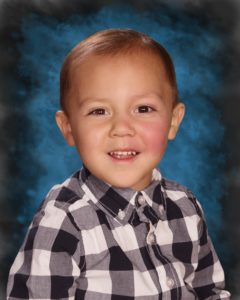 Gavyn’s birthmark and his story are uniquely his. In Gavyn’s case, he has the “ideal” birthmark — it’s just on the surface and doesn’t affect his brain or mouth. The laser treatments worked and lightened how red his birthmark was. Many people and families aren’t as lucky as we were.

With the money raised, other families that aren’t as fortunate as ours will have access to the best resources to help themselves or loved ones who are born with vascular birthmarks. I don’t want other parents to worry about the costs of the many surgeries that their child needs. I don’t want kids to feel like they are “less than” because they are different.

No matter what they decide, I hope that each person born with a vascular birthmark learns to wear their birthmark as a badge of honor. They were born uniquely different for a reason

Crochets by Trista  on Social Media

The VBF Family is so grateful to Trista for sharing Gavyn’s story and for raising awareness and funds to support VBF’s public, non-profit mission. Consider making a gift in Gavyn’s honor using the form below. Together, we are changing lives, one birthmark at a time.