IN THE BEGINNING Dr. Linda, Christine and Dr. Milton Waner

VBF’s story began in 1994 when Dr. Linda Rozell-Shannon gave birth to her miracle daughter Christine. Though doctors had previously told Linda she could never have a child, they were wrong!  While she knew her own life had changed for the good, in that instant she couldn’t fathom how the lives of so many others would one day be impacted by her daughter’s birth.

When Christine was just six weeks old, Linda noticed a blister-like tumor on her baby’s lower lip that was later confirmed by her pediatrician as a hemangioma.  Over the next few months, the lesion grew to the size of a golf ball making it impossible for Christine to close her mouth, eat or speak properly. Everyday activities became increasingly problematic.
With few treatment options available at the time, Linda took matters into her own hands and researched everything she could on vascular birthmarks to find a solution for her daughter and others like her.  She soon learned that vascular birthmarks were the most misunderstood anomaly in the medical field and that few doctors could accurately diagnose and appropriately treat these lesions.

“Doing nothing’ was not an option for me or my daughter,” Linda explained. “I promised God that if He would help me find a doctor who would make my daughter look normal, I would dedicate my life to helping parents affected by vascular birthmarks.”

Her tireless determination quickly translated into action. In October 1994, Linda founded the Hemangioma Hotline, a resource that would later become known as the Vascular Birthmarks Foundation (VBF).

Six months following the Hotline’s launch, Linda contacted renowned surgeon Dr. Milton Waner regarding Christine’s condition. Dr. Waner agreed to take on the case and several weeks later performed the transformative surgery that changed the course of Christine’s childhood, her life, and the life of her mother.

“I remember Dr. Waner telling me that he could give my daughter a normal lip after a single out-patient procedure,” Linda recalled.  “True to his word, two hours after the surgery began the lesion was gone and Christine’s lip was the normal size for an 18-month old. We didn’t even recognize her. God had answered my prayers!”

“I have watched Christine grow from an infant to a mature woman,” said Dr. Waner. “To know that I have been able to have such a positive impact on her life and the lives of others is my reason for living.”
The success of Christine’s surgery inspired Linda to partner with Dr. Waner to write Birthmarks, A Guide to Hemangiomas and Vascular Malformations. Twenty years after its publication, the book remains the authoritative, go-to resource for families living with vascular birthmarks. 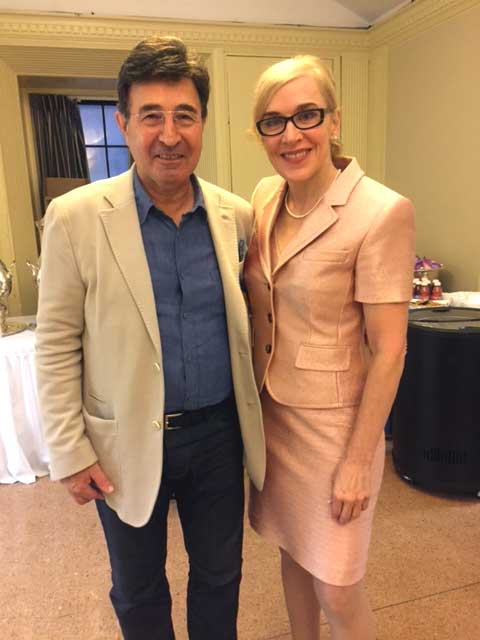 “In the early days, Linda was the sole parent looking out for these children and I was on the cutting edge as the surgeon who was responsible for moving the bar to early intervention,” recalled Dr. Waner. “For a long time we were the two lonely voices in a wilderness of conservative physicians. Much has changed and I hasten to add that we were in some small way responsible.”

“Linda is an incredibly driven person who has dedicated her life to helping others. She interacts with so many people in this field each and every day and has had a profound impact on the lives of children and adults with vascular birthmarks. She will leave no stone unturned in her quest to help others.”

In 2008, Linda earned her PhD in Education with a dissertation focused on identifying the acute stress parents face when having a baby with a facial hemangioma. Today, Dr. Linda is considered the lay expert in the world on vascular birthmarks and Christine is a graduate student pursuing a Masters degree in teaching.

“I feel honored to be a part of something so big,” added Christine Shannon.  “That my mom was empowered to help so many people because of a condition I was born with is really amazing to me. She could have put it behind her and moved on, because it was traumatic enough as it was. But she was called for something bigger. Seeing her help countless numbers of people definitely impacted me. When I was thinking about what career path I wanted to follow, my biggest requirement was that it had to be something that would ‘Make a Difference’ … which is the VBF motto.”

For Dr. Linda and her team at the VBF, every day is a new opportunity to make a difference in the constantly growing vascular birthmarks community.  In the U.S. alone, more than 40,000 children are born each year with a vascular lesions that requires the opinion of a medical specialist.

Just this past December, VBF’s 100,000th patient—a three-year old girl with a hemangioma much like Christine’s—underwent treatment to have her vascular anomaly removed.

Thanks to Dr. Linda’s indefatigable spirit and commitment to the cause so personal to her heart, she and the Foundation she created will continue to provide life-changing assistance for people around the globe who are living with vascular malformations.

“We’ll be pushing for research, results and progress in diagnosis and treatment for every member of our community,” added Dr. Linda. “That’s our promise.”

You can email Dr. Waner at https://birthmark.org/waner