In 2006, Maille was born with Klippel-Trenaunay Syndrome. As part of her syndrome, Maille has a combination of venous and lymphatic malformations in her right leg, as well as a large port wine stain birthmark that stretches from her lower back, and down her right leg to her pinky toe.

Initially, Maille’s parents did not understand the impact of her birthmark. They took her to a Pediatric Dermatologist, who had the foresight to order an MRI for Maille around the age of one year. Based on the results of this study, Maille received early treatment and diagnosis through the Comprehensive Vascular Anomalies Program (CVAP) at Children’s Hospital of Philadelphia, and is now under the care of an expert team of physicians.

During her procedure in 2020, Maille underwent a biopsy that further confirmed her diagnosis of Klippel-Trenaunay Syndrome (KTS) by identifying a PIK3CA gene mutation, which is associated with KTS as well as several other conditions and syndromes.

Despite her condition and its associated symptoms, Maille has been able to become an accomplished competitive dancer, passionate community service volunteer, and recently took on the role as head of the new Teen Committee for the Vascular Birthmarks Foundation Global Ambassadors. Competing in pageants for over eight years, Maille’s social impact initiative, ReMARKable you! is designed to promote awareness about vascular birthmarks and celebrate individuals with these conditions. Her mission is to encourage individuals with vascular birthmarks not to be defined by the mark on their body, but rather the mark they can make on the world. 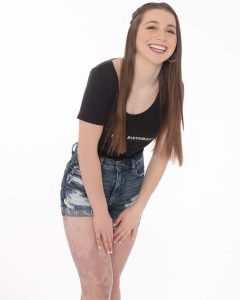 Maille and her parents are incredibly grateful to Dr. Linda, Scott Cupples and the VBF, because they have allowed Maille to connect with other individuals with vascular birthmarks and let her know she is not alone. The VBF has provided Maille with resources to help spread awareness about her condition through readings of Buddy Booby’s Birthmark, Put On Your Birthmark and The Ask Accept Anti-Bullying Campaign. The VBF has empowered Maille to become the advocate she is today, and provided her with mentors and friends to help guide her on her birthmark journey. She is proud to be part of the VBF Global Ambassadors and help parents of children with vascular birthmarks see that with love and support, anything is possible!