I have experienced physical pain daily from a young age, and this had a knock-on effect on my mental health! The reason for writing this is for anyone that has a health challenge to read my story and take something from it.  Some might find my unusual way of coping with my condition interesting!  It might be that someone has a health condition and can relate to some of my stories.   My story might inspire, or it might be a shock for people to understand the condition and the effect it has on my life!  I hope that some might relate to my struggle with their own health and know they are not alone. I’m telling this story to bring awareness of Klippel Trenaunay Syndrome. 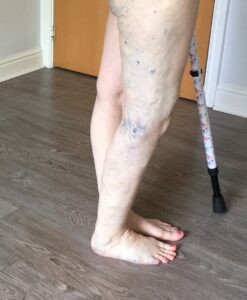 My congenital condition is Klippel Trenaunay Syndrome, which affects my right leg, foot, and private area.  When I was growing up, the doctors in Glasgow that I went to see called the condition an ‘abnormality of the blood vessels’ or ‘Venus malformation’.  As the condition is rare, affecting only 1 in 100,000 people worldwide, no one in the hospital field in Glasgow that I attended had seen anything like this, especially when I was a young child.

Klippel Trenaunay Syndrome (KTS) is a rare congenital vascular disorder in which a limb may be affected by port wine stains, varicose veins, too much bone, and soft-tissue growth. The limb may be larger, longer, or warmer than normal.  Everyone with KT Syndrome suffers from their own kind of symptoms.  Most people suffer with painful thrombosis, inflammation, muscle cramps, joint, and bone pain. I struggled with all these symptoms.  The cause is unknown.

A specialist told my mum when I was a baby that the ‘blue-black birthmark’ would disappear with time!  This wasn’t the case and I never received my Klippel Trenaunay diagnosis until adulthood.  Being the youngest of three children, I wasn’t wrapped in cotton wool and protected like I would have been if I was the firstborn or an only child.  I wanted to be like my brothers and was very much a tomboy from an early age.  When I could, I would be out playing on my skateboard, bike, and climbing garages.  I was lucky that I was able to do these things at a young age.  My condition got worse as I hit puberty and continued to cause problems from then onwards.  I would always wear thick black tights or trousers.  I was lucky in the fact that I could wear trousers to school, so no one got to see how my leg looked.  I had an operation on my foot at the age of (13) thirteen.  I attended Yorkhill Hospital in Glasgow.  The consultant thought by injecting a solution into part of my foot might burst the veins. The veins on my foot are exceptionally prominent.  If this had worked, he would have tried the same treatment on my leg.  Unfortunately, the procedure did not work.  The solution burned a hole in my foot.  This took months and months to heal and has left me with an unsightly scar.  To me, my leg looks dreadful, so another scar probably doesn’t make much difference! 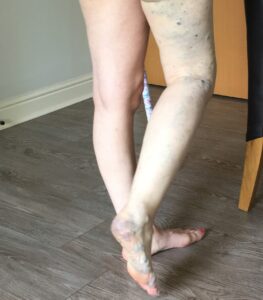 I was referred by my doctor to see a consultant at Glasgow Royal aged 14.  After X Rays were taken, I was informed that I had degeneration in my hip, knee, and femur in my Klippel Trenaunay leg.  The consultant certainly didn’t have a warm manner, and I was told a matter of fact that I would end up in a wheelchair soon enough!  There was no counselling or help suggested for me to process this information.  My high school years were a struggle as I had mild dyslexia, and I was in excruciating pain and hiding my condition. I can find concentrating difficult due to pain and discomfort.  Teachers were unaware of this.  Their perception of me would probably be moody and uninterested.  I started secretly drinking around 14 after seeing the consultant at Glasgow Royal.  From the age of (14) fourteen, I began to stress about my appearance.  My focus was always on hiding my condition.  I couldn’t bear the sight of my condition, and I couldn’t cope with anyone I knew seeing how it looked.  It makes me sad to think of summers I was so uncomfortable hiding my leg in the heat.

I was experiencing pain in my lower back at the age of 20.  Also, due to my using tanning beds, I noticed a patch on my lower back that remained white.  I had x rays taken and was informed; I had spina bifida occulta.  Again, I wasn’t supported in how to deal with this information or told how this would affect me!   It was only several years later I googled what it was!  Due to my knowledge about the extent of the degeneration in my bones and the looming thought of being in a wheelchair, I decided against having children.  I felt it was the right choice for me.  This was something I would need to explain to new partners as generally most men at some point would start to want a family.  My health conditions have certainly affected romantic relationships; however, at the time of writing, I have been with my current partner for just over a year.

I was struggling more with my mental health around the age of 25. I had split from my long-term partner and was feeling low about my life prospects.   I felt I needed to track down an orthopedic surgeon that would be willing to replace joints in my leg in the hope this would help my mobility. I didn’t discuss this decision with anyone, and I attended the hospital appointments alone.  I didn’t feel I could speak to anyone in my life about how I was feeling.  It does make me sad to feel I was making these decisions alone, and perhaps they were not the right decisions for me to make alone.  I had my hip replaced at 26.  I had been told by the consultant when I was 14 that no one would operate on my leg as they wouldn’t be able to stop the bleeding.  I had lived with this memory until meeting the consultant when I was 26 that agreed to replace my hip.  I required 8 blood transfusions over a 2-week hospital stay.

Unfortunately, since having my hip replaced, I have had recurring bursitis.  I was unaware this could happen from having a hip replacement. Initially, I thought my hip must be faulty as the pain was excruciating, and I was dragging my leg at times.  I was far worse than I was before having it replaced.  After numerous scans, including MRI, I was informed it was bursitis.  There isn’t anything that can be done.  People couldn’t understand why I was in worse pain after having the hip replaced.  Most people, including myself, thought the hip replacement would help alleviate the pain.  Unfortunately, the pain is excruciating and limits my mobility further.  As I have always hidden my condition, I think people just assumed I had a problem with my joints.  After having the replacements, people thought I should be better! I have been taking Dihydrocodeine, Amitriptyline, and Paracetamol since having both replacements, and I have been taking anti-depressants for 10 years now.  The bursitis is frequent and affects every part of my life.  I lost a job that I enjoyed.

I also had surgery eventually on my private area as it impacted profoundly on my mental health.  This is one of the best things I did do.  I wish during my teenage years; I had been able to speak to a professional about this.  It impacted how I felt as a woman.  It was an excruciating process to help make my private area look better.  It has made me feel less self-conscious when I am with a sexual partner, so to me, it has been worth the pain.

Until my late 20s, I only knew my condition to be ‘an abnormality of the blood vessels’ or Venus malformation.’  A friend that is a physio said she had seen a patient with a condition very like mine, and it was Klippel Trenaunay Syndrome’.  I researched this condition and was shocked that this was, in fact, the condition I did have.  To get this confirmed, I asked my general practitioner to refer me to a consultant at the Royal Free Hospital in London.  The Consultant concluded this was, in fact, the Health condition that I was born with.  I was told at that appointment I should have been wearing high strength compression stockings all my life.  Also, my D Dimer test was exceptionally high and that I should have been prescribed daily aspirin all my life.  Since then, I have been taking 75mg of aspirin daily.  The diagnosis was a massive change in my life!  I found a Klippel Trenaunay Support Group online.  I connected with lots of people over the world with the condition.  This was an amazing experience to connect with people that had been through similar pain.

I have back problems now.  Unsure if this is a combination of the Spina Bifida Occulta or just arthritis, which I have been told I have in my lower back.  Due to overcompensating, I now have arthritis in the joints of my left leg.  I feel passionate about people not judging others if they don’t know that person’s circumstances.  I have kept my weight down, dress to cover my condition, and choose to put a smile on my face and try to be positive when I am in company.  Sometimes I feel so miserable and exhausted with the pretense inside.  I am aware people judge me as they are unaware of how my leg looks.  It has taken me to nearly 40 to show people and speak out about the reality.

I have felt loneliness growing up with this condition.  I have not helped myself with my lack of communication at times.  I wanted to be loved and accepted even though I felt ashamed and disgusted at the appearance of the condition myself.  With age, I now appreciate I have been fortunate in things that I have achieved and overcome.  I believe I am a stronger person because of what I have been through.  I feel so lucky that I have got to this age.  I am blessed with my partner, family, and friends.  I hope I have many more years of being able to cope with my disability.

Donate to the VBF 125K Campaign