“You are in the right place” Sherry Parrish, 2017 VBF Board Chairman

There we were in Dr. Waner’s office in New York City looking at the photos in his books in the waiting room. It had been several years since the first time we met Dr. Waner. In one of the photo books, Brooke found her sister, Paige, as an infant still with her birthmark.

Some of the other mothers in the waiting room were wondering why we were there. Neither of my children appeared to have a visible birthmark.

I took the book over to them and said, “this was my daughter then … and this is her now,” pointing to my oldest daughter, Paige. “I know how you feel. It will be okay.”  Paige’s scar from her birthmark excision was barely visible.

Paige was born on October 1, 1997 – at a time when less than 2% of the world used the internet.  Paige turned 20 this October.  Still only half of us have direct access to internet resources on vascular birthmarks.*

When Paige was only 5 1⁄2 weeks old, I noticed a spider web vein beneath her right nostril. By 7 weeks, the area had become raised and the coloring was a light purplish

The pediatrician asked to see her at seven weeks of age. I was one of the lucky ones. My pediatrician knew what the birthmark was, and knew that it was going to grow – and grow fast.

Within the week, we visited a plastic surgeon. He said the birthmark would “ruin” our baby pictures, but that he would fix the damage down the road. “What?” I thought to myself, visibly shaken.  Martin, Paige’s father, was the rock. “We’re going to love her no matter what,” he would say, “and maybe we’ll spoil her a little more.” We left the plastic surgeon’s office even more determined to find immediate treatment options.

I remember continually searching the internet for physicians that could help my daughter. My mother would say, “Sherry, this is consuming you … maybe you need to see someone,” insinuating that talking to a psychologist could ease my tension. But I was emotionally taxed and forward thinking: Is my daughter going to have friends? Is she going to be bullied? How will having a facial birthmark affect her self-esteem?

At the playground, other parents would take their children away rather than play with Paige, thinking my daughter had a disease or syndrome that their child could catch, rather than just a birthmark. And I had additional questions: If this was happening on the outside of my baby, what could be happening on the inside? If this happens at birth, what might happen down the road?

We saw a second plastic surgeon the following week, and he had great advice. He thought we needed to get Paige to a doctor that saw these every day – not a doctor that rarely treats birthmarks. I became aggressive and found the VBF website. I called Linda’s number, spoke to her and received her book.

God obviously sculpted and personally placed Linda on earth. Talking with her gave me immediate inner peace. She knew the answers to the questions I had, and she immediately referred me to a birthmark specialist – Dr. Milton Waner.

In 1997, Dr. Waner was still a ‘talk on the phone’ kind of guy. He would talk to you rather than send an e-mail when you had a question. Throughout it all, he was calming, reassuring, and humble. He made us feel at ease, taking the time to explain the drug treatment timeline and procedures at a level we could understand.

At the time, Dr. Waner was in Arkansas and we were in Texas. Paige was to have several laser sessions before her surgery to remove the hemangioma, so we elected to have her laser treatments performed in Houston, Texas with a physician that was trained by Dr. Waner. Dr. Adam Levy was that physician, but due to availability, Paige was treated by Dr. Levy’s partner, Dr. James Nigro.

Dr. Nigro and Dr. Waner worked together on a drug regimen for Paige to try to stop the growth of the hemangioma. They recommended oral steroids. Paige started the steroids at 10 & 1⁄2 weeks of age, and finished them when she was 8 months old.

Paige’s hemangioma growth was both deep and externally superficial – it consumed the right upper lip and involved the right nostril. She went on to have 8 or 9 laser treatments by the time she was 9 months old to decrease the red coloring on the superficial layer.

Early diagnosis and treatment was key for us. The steroids appeared to abort the growth of the hemangioma, and the lasers decreased the superficial area of redness on her face. 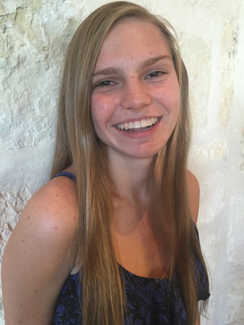 Dr. Waner surgically removed Paige’s hemangioma in Little Rock, Arkansas on October 30, 1998, when she was just one year and one month old. I felt very fortunate that Dr. Waner was operating on Paige, although it is very hard handing over your 13-month- old, 15-pound child to a nurse for surgery.

Linda was visiting Dr. Waner when we made our first trip to Little Rock. It was wonderful to meet our angel in person.

When Dr. Waner removed the hemangioma, he was unable to do all the cosmetic lip repair at that time. Paige’s lip repair was done the following year, when she was 2 years old. We also visited Dr. Waner’s office in New York City several years later, the day I showed Paige’s photo to the other moms in his waiting room, for a fractional laser treatment for the scar on her right upper lip. Paige’s hemangioma excision scar was minor at that time.

Throughout the entire process, I had ongoing phone conversations with Linda, and with Dr. Waner’s office and staff. Dr. Waner has always stated that he wants as much of a birthmark removed as possible before a child enters kindergarten. Early intervention made a huge difference for our family.

My daughter is beautiful and she is very happy with the results. A couple of fractional laser treatments could probably decrease the visibility of the scarring, but Paige is very comfortable with her outcome, and is not interested in more treatments at this time.

VBF made a difference for us. What makes VBF special is being able to go to a conference and share stories with other families affected by birthmarks, talk about therapies and scenarios experienced by others, and actually hold the hands of another mother, saying “I know how you feel. It will be okay”.

Just like I told the mothers in Dr. Waner’s office so many years ago. You are doing your best. You are in the right place. No matter what, it will be okay.